During my last project we had an interesting challenge that we solved rather creatively.

We were in the process of developing a critical business dashboard. The dashboard contained a huge amount of data and in order to be responsive, it had to be cached.

There was also a challenge with the cache update frequency and timing. The data we received was incomplete and came in irregular intervals, so we had to devise a caching strategy that recognised when complete data was received, reacted right away, and of course, was invisible to business.

To put the introduction into more concrete terms, we had to figure out how to update the MicroStrategy cache right after Complete data for a User Group is loaded into backend tables (We used SQL Server as our DBMS), and how to update it only for User Group(s) that have Complete data. After all, we want the data to be up to date, and there is no need for additional overhead of updating all User Groups if only one User Group received new data.

Essentially, we needed to:

To overcome the first challenge, we used status tables and FTP. For the second challenge we used a combination of Windows and MicroStrategy tools and systems.

So let’s talk about the status tables and what it means for data to be Complete.

Each night we had a standard nightly ETL process that populated the backend tables with new data. For each User Group we tracked multiple metrics, such as Revenue, Profit, and similar. When we received the data for all tracked metrics for a User Group for a month, we flagged the User Group as Complete and ready for a cache update. We stored this information in th Status Table.

Example of an Update File. Each line represents a User Group that received all metrics data for a month. In Status Table terms, that means that Complete = 1 and Updated = 0.

We installed the FTP server on our MicroStrategy Web Server machine. On the left hand side of the screen you can see the three folders on our FTP Site. We’ll talk about that a bit later.

The second challenge is to process the file’s contents and use that information to update the cache for User Groups that appear in the file. For that, we used a combination of:

The Update_Cache.bat batch script is scheduled to run on the MicroStrategy Web Server after the ETL nightly load is done. The job of the Update_Cache.bat is to process the contents of the Update File and trigger the MicroStrategy Event for each User Group contained in the file. Events are triggered from MicroStrategy Command Manager scripts (which we call from Update_Cache.bat). Events for individual User Groups would trigger event based schedules, which would in turn trigger subscriptions based on those schedules. When the subscriptions are triggered, the cache for a specific User_Group is finally updated.

Let’s try to make sense out of that.

Here is our Update_Cache.bat script. It’s broken down into four logical parts for easier understanding.

@echo off echo SCRIPT START: %date% %time% rem with echo off command, only rows starting with echo will be displayed. In that way debugging is made easier and we can easily track the execution SETLOCAL ENABLEDELAYEDEXPANSION rem position into InputFiles folder. /d option is required when changing drives (We're changing from C: to D: drive) cd /d "D:\FTPSite\InputFiles"

This is the part where we start our script with a few utility/logging commands, and position ourselves in the InputFiles folder. This is the folder where the Update File is transferred from the ETL Server via FTP.

Here we start the processing. We’re looping through the InputFiles folder and searching for the Update File. There can be multiple update files, so when we start processing the first one, we immediately move it from the staging area (InputFiles) into the ProgressFiles folder. Here it can be processed at leisure.

rem loop trough Update File in progress folder and run trigger for each User Group existing in a file rem if there is no Command Manager script for a User Group, skip the timeout and go to next user Group in a file

Example of a Command Manager script

After the Event it triggered, we have 300 seconds of timeout so the cache for a User Group can be updated without interference from another User Group.

This part of the script archives the Update File into the ProcessedFiles folder, and logs the date and time for logging and tracking purposes.

Below is a rough graphical display of the whole process. 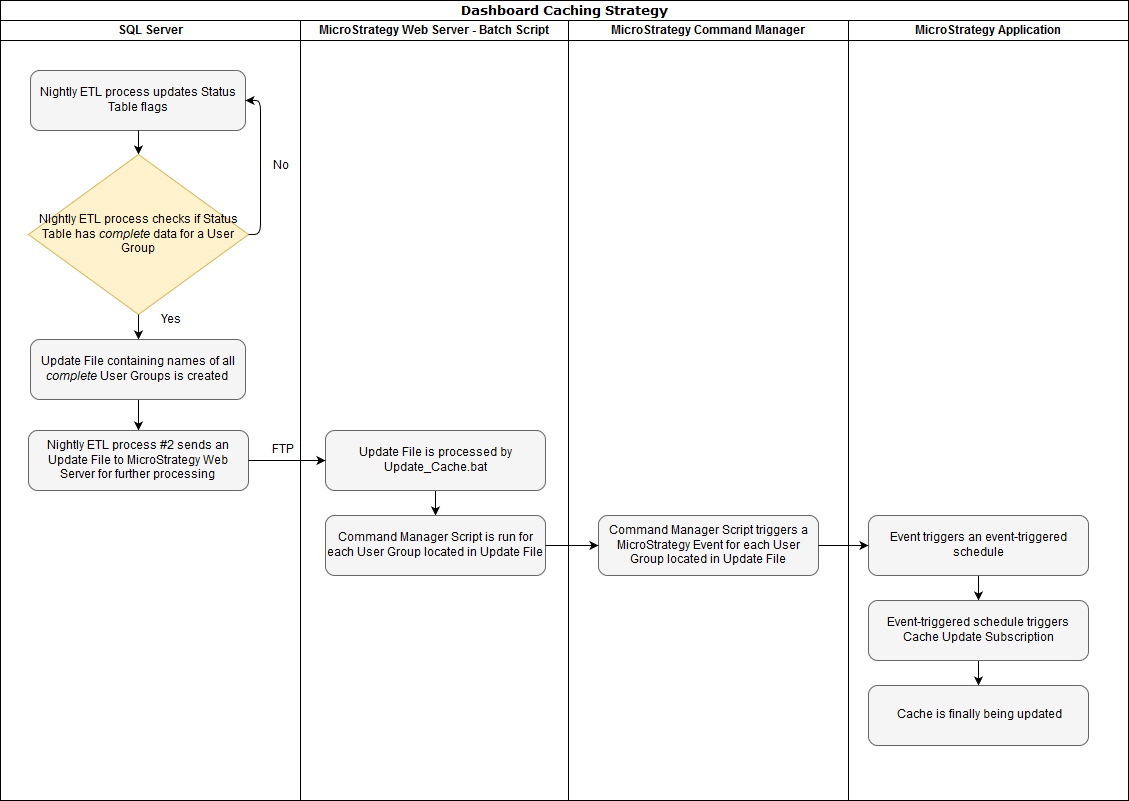 This blog post shows how can MicroStrategy’s great interoperability capabilities be used to drive value for the clients. We used a combination of SSIS, MicroStrategy, and Windows tools to great effect.

In conclusion, event driven caching is a powerful way of automating the mundane tasks so we can concentrate on the creative work that we all love. MicroStrategy offers us powerful ways to achieve that goal, and we’ll be sure to continue in that direction.